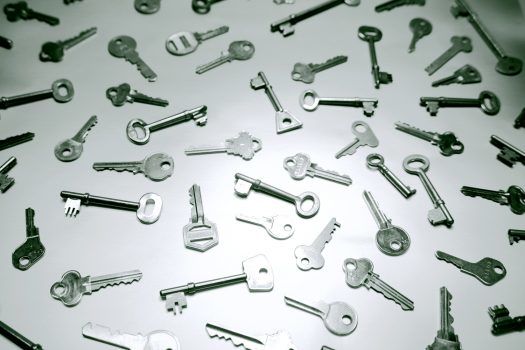 Who Has A Key to Your Home?

When most people move into a new apartment or home they automatically know they need to change the name on the electric service (and other utilities) for that address. In many cases, they will change out their toilet seats in their bathrooms. However, most people never give the keys to their door locks a second thought!
Many States have property code regulations regarding locks and keys on rental properties. One such regulation is that the apartment must be rekeyed at the landlord’s expense each time a new tenant moves in. However, that is not always the regulation in place for every hamlet and burrow.
For your own personal security, it’s best to request that the landlord rekey everything before you get moved in. Ask for this in writing and if possible work it into the lease. If though the landlord won’t commit to taking this step…and you have your heart set on this apartment, then you need to have the locks rekeyed with the understanding that you will immediately provide copies to your landlord or his/her agent.
FIVE…that you can count on!
Several years ago a security survey was done in an upscale part of a major metropolitan city on the eastern seaboard. The basic question was, “How many people have a key to your home that are not living there?” The startling answer was an average of five people had keys to the homes or apartments of people in this trendy part of the city who did not reside at that address.
This included landlords, building superintendents, grocery delivery services, dog walkers, neighbors, co-workers (secretaries/ assistants) and building doormen to name a few. However, this does NOT include people you don’t know about. There are two types of people who may have a key to your home. Those that should and those that should not!
Those that should have a key to your home are people that you have knowingly given access to your personal sanctuary. These should be either people you know personally (and very well) or they should be people that have undergone a great deal of professional scrutiny…including background checks and stringent reference checks.
The Should Not’s…
The second group of people who may have access to your home consist of two smaller groups. One group are those with no nefarious intent to do you harm. These are the people who forgot to return a key to the landlord when they moved out of your apartment or found a key lying in an elevator of your building and forgot to turn it in and now it rests in a desk drawer somewhere.
However, the other group should cause you concern as they make up the group of should not’s. These are outside contractors or vendors who conveniently forget to return a key once they complete a work order. Perhaps they are a disgruntled employee or an ex-boyfriend or girlfriend who said they lost your key once you broke up with them. Maybe they are that dog-walker that you never heard from again who still has a key.
Of course it makes sense to change your locks or have them rekeyed if you know someone never returned a key that should have. However, it makes even more sense to do so due to the people you aren’t aware of that may have a key!
The Bottom Line
While some people may consider the mere mentioning of replacing toilet seats when moving into a new apartment as superfluous at best, it nevertheless draws the obvious contradiction in how most of us approach our personal safety and security. The single most important thing we can do when moving into a new apartment to enhance our security is the one we take most for granted…rekeying or replacing door locks.
At Empire City Locksmiths we can assure you that our professionally trained staff have all been thoroughly vetted to ensure they meet our stringent employee hiring guidelines. You can be certain that an Empire City Locksmith is both knowledgeable and trustworthy. You will get what you pay for and we will recommend only what you need.
Let us prove to you why the most trusted name for security in Manhattan is Empire City Locksmiths.